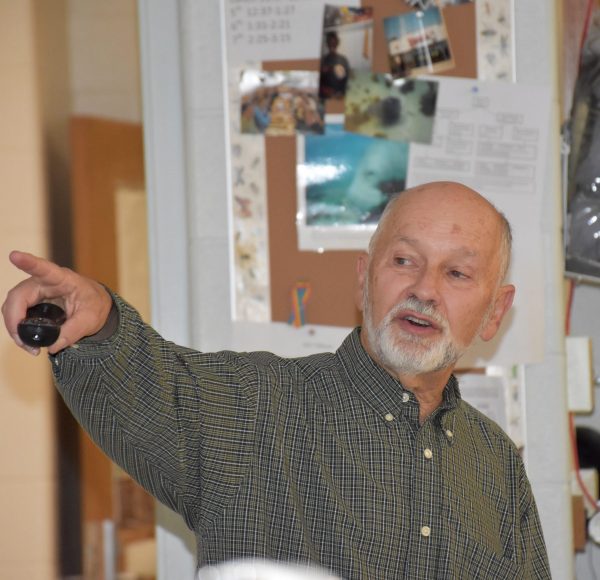 Dr. Stephen Kress had his first success as a naturalist when his fourth grade teacher at Montrose Elementary challenged him to identify a flicker. The 1963 BHS graduate went on to become a renowned conservation biologist, known to birders worldwide as “The Puffin Man.” His four-decade-long project to restore a vibrant population of the colorful birds to Maine’s coast is credited with developing techniques that have become the basis for seabird restoration projects around the world.

“It seemed like it would be pretty easy, back when I was in my twenties, to bring the birds back to an island off the coast of Maine,” Dr. Kress told BHS science students October 9. “I had no idea I’d spend a lifetime doing it.” 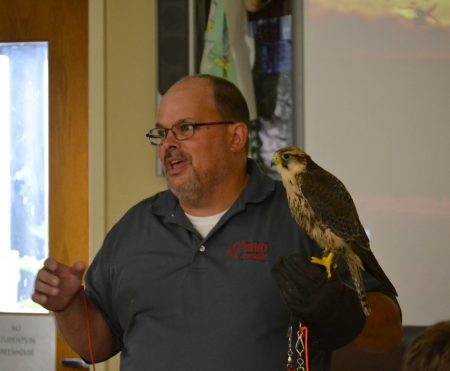 Joe Dorrian, Director of the Ohio School of Falconry, brought a Lanner falcon and two other raptors into the classroom.

Dr. Kress spent the day speaking to Bexley High School science classes as the 2017 Judah Folkman MD Scientist-in-Residence. This was the 17th year for the program which is funded by BEF’s Dr. Judah Folkman (Class of 1950) Science Endowment and aimed at introducing Bexley students to the range of career opportunities available in the sciences. Dr. Kress was joined throughout the day by Bexley parent Joe Dorrian, Director of the Ohio School of Falconry, who brought a Eurasian Eagle Owl, a Harris’s Hawk and a Lanner Falcon into the classroom for hands-on demonstrations.

When Dr. Kress went to work at an Audubon camp on Maine’s Hog Island as a young man in 1969, there were only three puffins surviving on Maine’s coast. A once-robust population had been decimated a century earlier by hunters in search of food, eggs and feathers. But the birds survived in other places. Dr. Kress decided to see if he could encourage puffins to resume nesting at Eastern Egg Rock, where a flourishing colony had died out in 1885.

In 1973, Kress and his colleagues began bringing puffin chicks from Newfoundland to the remote island, where they fed and protected them until they left the nest. Puffins are known to return and breed at to the spot where they were raised. It was four years before the first puffin returned — and four more before puffins began to nest and breed on the site. From 1973 to 1986, the team transplanted almost a thousand puffin chicks.

Dr. Kress told the students that “this was not a project for an impatient person, and I wanted to prove all the naysayers wrong.” To encourage the puffins to stay at Egg Rock, Dr. Kress first installed decoys, then mirrors so that they would not feel alone.

Today, there are more than 1000 puffin pairs nesting on Maine’s eastern islands. Techniques Dr. Kress and his colleagues developed have been used around the world to restore populations of birds such as the Crested Tern in China and the Short-Tailed Albatross in Japan. Worldwide, at least 42 seabird species in 14 countries have benefited from restoration techniques developed by Dr. Kress’s Project Puffin, according to the Audubon Society.

In Maine, Dr. Kress told students, the puffins now face a new challenge as rising water temperatures affect the fish they feed on. Human intervention continues to be needed. “Is there a time when restoration leads to a totally sustainable, self-supporting population?” he asked. “So far, the answer is no.”

“All wildlife needs friends,” he told the students. “You don’t have to be a biologist to be a friend to these animals. Just knowing that these birds are connected to everything else in the world””that helps.”