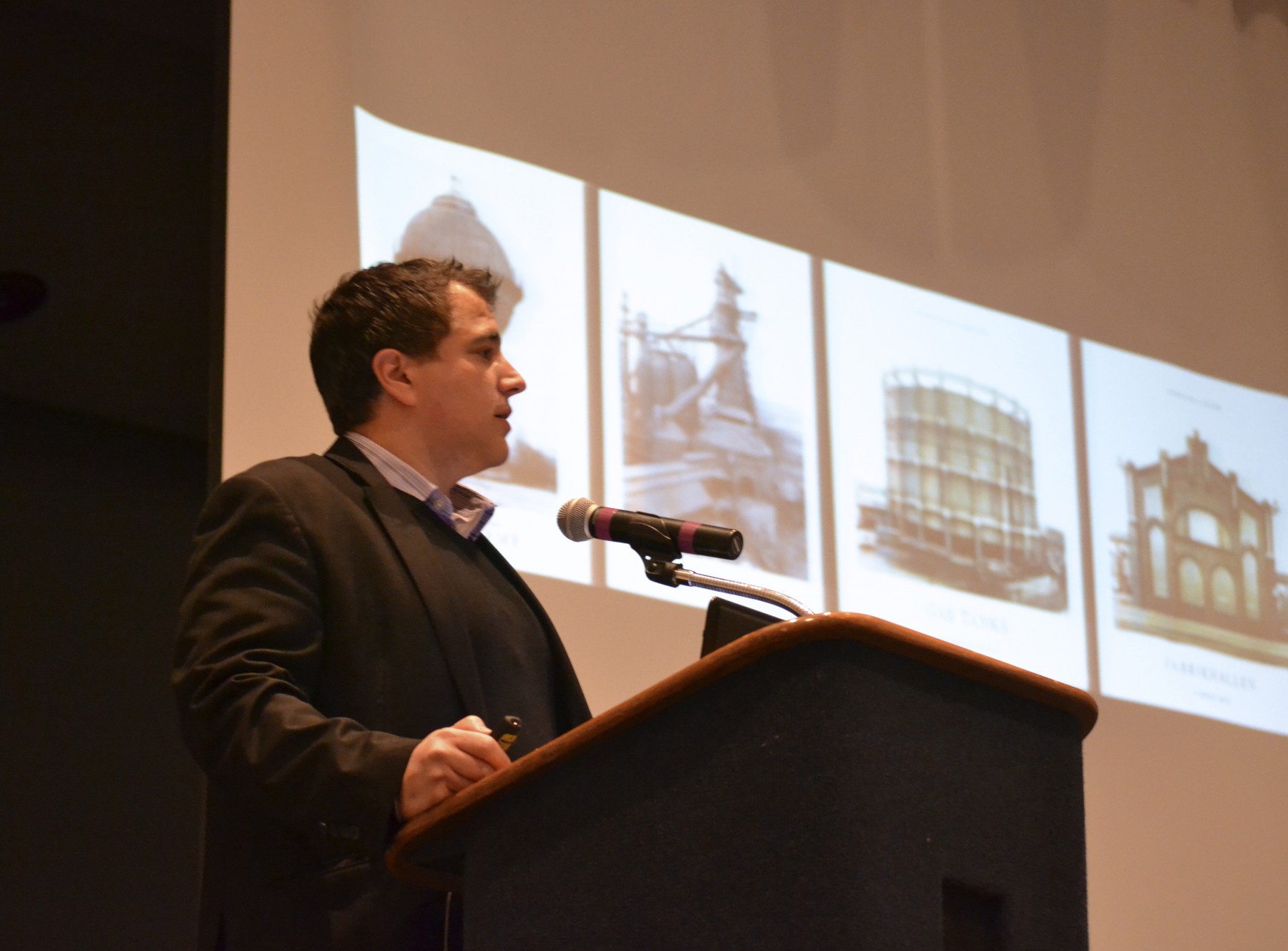 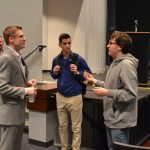 Students approached the speakers (shown here: Chad Bouton) with questions after the presentation.

Bexley High School students heard presentations during the Dec. 2 extended homeroom period from a local architect who specializes in re-imagining urban spaces and a medical researcher whose work harnesses the power of engineering to bring intentional movement to those who are paralyzed. It was the Fall 2014 installment of the school’s “STEAM Talk” series, a program supported by the McCamic Family Foundation through a grant to the Bexley Education Foundation.

“STEAM” stands for Science, Technology, Engineering, Art and Math ”” a twist on the better-known STEM concept. The series aims to pique student interest in careers that exploit and combine these disciplines.

Students were inspired by the presentations, said BHS Art Specialist Helma Groot. Her AP Art History students referred back to Mr. Bongiorno’s ideas often during a field trip the next day. “The architect’s talk included photography, street art, and art history,” she said.”The architect’s presentation gave my art students an interesting view of where a career in art and design can lead.

“The presentation by Mr. Bouton was just as fascinating,” she added. “His work includes a large amount of creativity and design. Mr. Bouton’s presentation also gave students an engaging view of a highly creative and innovative profession.”

Architect Michael Bongiorno described how his Brooklyn childhood inspired his interest in “leftover” and wasted urban spaces. After he was caught exploring and making graffiti in a New York subway tunnel at 15, his father told him, “You can find what you’re looking for; you just have to ask yourself a different question.”

Now a principal and senior designer at DesignGroup, an AIA Gold medal architecture and design firm in Columbus, Bongiorno’s recent projects include the Columbus Museum of Art Expansion, the award-winning McConnell Arts Center of Worthington, and the Grange Insurance Audubon Center. A graduate of the Pratt Institute School of Architecture, Bongiorno described his ideas about reclaiming urban ruins. When looking at a forgotten bridge or an empty urban grain silo, he said, “we can tear it down”¦or we can be radical opportunists and turn it into something more magical and more sustainable than it ever was.”

Chad Bouton, a Research Leader at Battelle, described to students the process of decoding brain activity to isolate the impulses that govern individual movements such as a twist of the wrist or a finger flex. The number one wish of people who are paralyzed, he said, relates to the movement of the hand””and this summer, Bouton and his colleagues succeeded in allowing a paralyzed patient to grasp a cup, lift it to his mouth and drink””all through the use of a brain implant that replicates these impulses so that the patient can use thought to control movements.

Bouton’s work has been featured on the CBS program 60 Minutes and many other news programs; he holds over 70 patents worldwide and has earned several R&D 100 Awards. He has been named Inventor of the Year, and Distinguished Inventor, and was recognized by the National Academy of Engineering in 2011.

The next STEAM Talk will be held in the spring of 2015. The Jeremy C. McCamic Family Foundation, which provides funding for the series, is a private family foundation located in Wheeling, WV. The Foundation was founded by Jeremy C. McCamic, a retired lawyer in Wheeling whose three children include Abby McCamic Feinknopf, a mixed-media artist whose sons attend the Bexley schools.