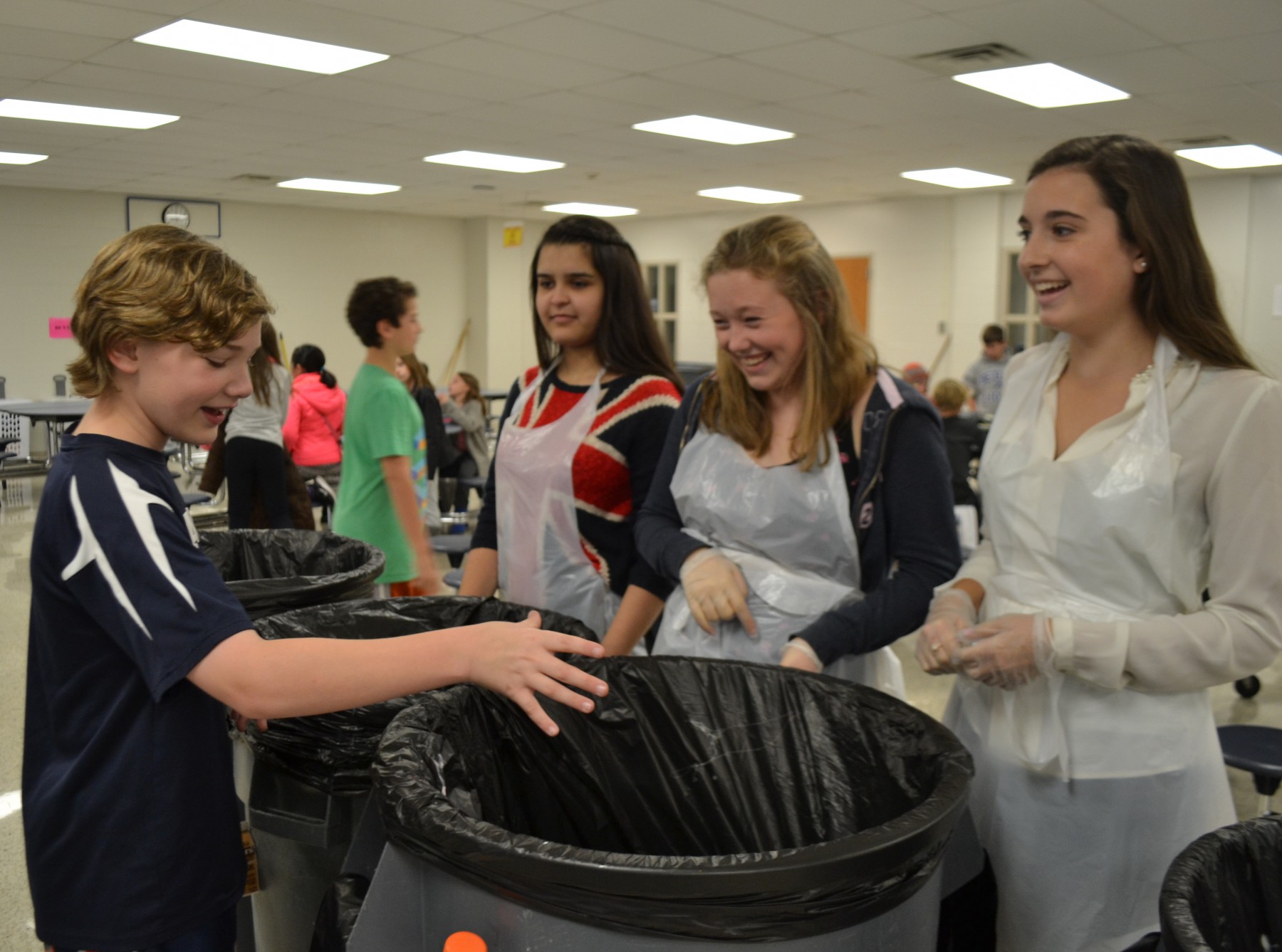 When Cassingham fifth grader Jackson Klingelhofer went to discard his trash at lunch today, he found not one but four trash bins, each marked for a different kind of waste. Where to dispose of his leftover baby carrots?

Luckily, Anna Old, a member of the eighth grade Service Learning Leadership Committee, was there to help. “Take the carrots out of the bag and put them here,” she said, pointing to a bin marked “BIOWASTE/ORGANICS.” The bag, she told him, should go in a different bin, marked for non-#1 or #2 plastics.

When another student walked up with a styrofoam tray bearing a plastic spoon, leftover baked beans, broccoli and a milk carton, Anna called on BHS science teacher Scott Logsdon to help figure out where everything should go.

But it’s worth the trouble. A single student can produce 45 to 90 pounds of garbage a year in disposable lunches, according to New York’s Department of Environmental Conservation. Finding ways to prevent that waste from going to the landfill by recycling, mulching and composting can make a huge difference to the environment.

And as students get involved in the process, there’s a lot of learning that can happen along the way.

Through a collaboration between BEF’s John and JoAnn Rohyans Sustainability Initiative and the BHS Environmental Club and with considerable support from Bexley’s Food Service Director Juli Carvi, Bexley City Schools aims to begin with a reduction in waste in the Cassingham Complex Cafeteria, and then expand the program district-wide. Today’s sorting, overseen by Mr. Logsdon and Ms. Carvi, was the first step in the process: a waste audit. The sorted waste will be measured and weighed in order to establish a baseline as the collaborative group devises a plan for moving forward. That’s where BEF’s Rohyans Sustainability Fund comes in: income from the endowment can be used to defray costs associated with collecting and hauling the sorted waste.

Of course, support from parents will be key to success in this initiative, which aims first to create a low-waste cafe, then a low-waste Cassingham Complex, and finally a low-waste school district.

But first, the cafeteria waste audit. “The idea is to create a low-waste cafe,” says Logsdon, “and we need to know where to start!”

Stay tuned: we’ll be following along as Bexley learns just what it will take to create a low (or zero!)-waste cafeteria.

< WHY I GIVE: Susan Marantz
CHECKPOINTS on middle school STEM classroom >