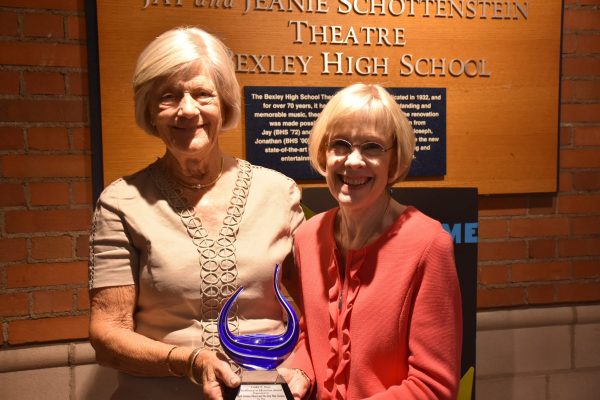 The Bexley Education Foundation celebrated the arts at its Annual Meeting held on May 8, 2019. The community was invited to the recognition of the 15-year anniversary of the dedication of Schottenstein Theatre and the completion of the BEF’s $2.1 million Campaign for the Performing Arts.

Individuals recognized at the Celebration of the Arts included Bexley Middle School Math Teacher, Mrs. Janeen Kimble and former BEF Board Member and current Advisory Council member, Beth Grimes-Flood. Mrs. Kimble accepted the 2019 Bexley Educator of the Year award and a $1,000 check from the Glick Family Fund at the Columbus Jewish Foundation.

Beth Grimes-Flood accepted the BEF’s Linda Kass Excellence in Education Award on behalf of herself and her late husband, Pete Grimes. Beth’s service with the BEF began in 2005 when she chaired the BEF Planned Giving Committee for four years and served on the Leadership Bexley committee. She becomes the fifth recipient of the award, following Linda Kass (for whom the award is named), Bob Darwin (posthumously), Barbara Giller, and Dr. Michael Johnson.

The Campaign for the Performing Arts was a collaboration between the Bexley City Schools and the BEF after the Bexley residents approved at $27 million bond issue in 2000 to fund construction of a new entrance and Arts Wing at the Cassingham Complex, as well as other district-wide facility improvements. Under the leadership of former BEF Board Chair, Pete Grimes, the BEF launched a capital campaign to renovate the theaters in the Cassingham Complex and enhance the performing space at Maryland Elementary. The campaign had three Chairs, Gary Giller, Frank Kass and Susan Quintenz. The high school theater was named in honor of the lead donors to the campaign, Jay and Jeanie Schottenstein.

The theater lobby, stage and other areas around the high school theater and on the first and second floors of the high school Arts Wing, as well as spaces at Maryland Elementary, were named in honor of major donors to the campaign. All Campaign for the Performing Arts donors were invited to attend the celebration, including those who participated in the “Buy a Seat” fundraising effort. Individuals who made a $1,000 campaign gift could have an engraved plate placed on a seat in the Cassingham or High School theaters. Over 200 seats were sold to parents, alumni and community members.

BEF announced at the celebration that it will re-launch the seat sales effort in the Schottenstein Theatre ”“ offering a plate on a theater seat for $500. Proceeds from the new seat sales program will fuel the BEF’s grants making budget. BEF grants support all areas of the curriculum, technology, the performing and visual arts as well as staff development and improvements to learning environments. For more information about the theater seat sales program, contact Pam Glasgow, BEF Executive Director at pamela.glasgow@bexleyschools.org , or call the BEF Office at (614) 338-2093.