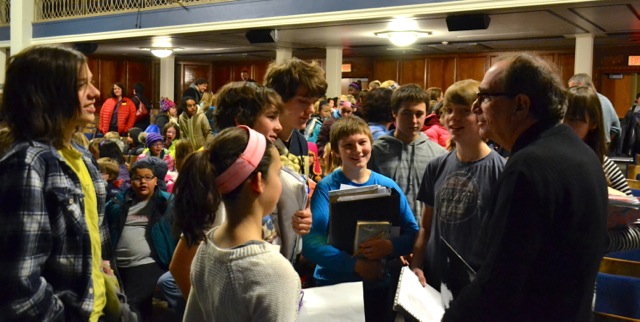 Fans travelled here from as far away as Atlanta and Cleveland on Friday the 13th of December when bestselling children’s author and “Goosebumps” creator R.L. “Bob” Stine returned to his native Bexley for a day of community engagement, bringing his star power and sense of humor””and a few shivers””to BEF’s 30th anniversary culmination celebration. Mr. Stine visited with Bexley’s 5th and 6th graders in the morning, sharing with them the story of how he started writing after finding a typewriter in the attic of his North Bexley home. Later, Mr. Stine, accompanied by his wife and editor Jane, visited with his Bexley High School classmates from 1962 at a reception at Bexley Public Library, and sat with his class for the first portion of the evening event before taking the stage for a conversation with Artie Isaac.

The evening event began with an award presentation: BEF’s Board of Governors presented the first-ever Linda Kass Excellence in Education award to its namesake, longtime BEF Board member and former chair Linda S. Kass. The award was created to honor a person who has done much to support the goals of the Bexley Education Foundation.

Also featured at the event was our anniversary video featuring Artie Isaac and a dozen Bexley Kindergarteners and first graders. We call it “With Bexley Students, Anything Is Possible.” You can watch it here! Many thanks to Mr. and Mrs. Stine, Artie Isaac, and all who helped us conclude our 30th anniversary year with fearsome fun.