You are here: Home › A Day and an Evening With James McBride
April, 2015

“Most of what I do fails,” National Book Award-winning author James McBride told 250 Bexley High School students during his Bexley Community Book Club (BCBC) visit Tuesday. McBride, who is BCBC’s 2015 Selected Author and in addition to writing novels is a composer, a professional jazz musician, the author of a memoir that has sold more than two million copies, a journalist, and a TV and film scriptwriter, counseled students to forgive themselves for mistakes and failures.

“One of the things I do really well is make a lot of mistakes and forget about them right away,” he said. “Do some of you like baseball?” he asked, pointing out that a .300 batting average represents only one hit for several at-bats. “Nobody bats 1000.”

In two wide-ranging conversations with students, McBride espoused the value of lifelong learning, pointing out that he is currently studying French, Italian and piano. He also engaged a theater full of students in a story development exercise, pointing up the role of conflict in creating plot. Their collaborative story involved a boy, a girl, the Bexley Starbucks and a dropped banana peel. “When conflict strikes the normal world, the explosion is story,” he said, adding that the conflict needn’t be great. “The smaller you start, the bigger the chance you have to grow the story.” 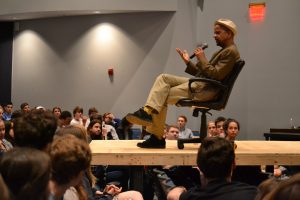 The author fielded questions from students about his writing process, his family history and his selection of locations and themes for his novels The Good Lord Bird and Miracle at St. Anna. He advised students to tape interviews with their parents and grandparents, to look for connections between people, and never to undervalue niceness.

In his evening presentation to a packed house at the Lincoln, McBride sat down for a public conversation with former radio host Fred Andrle, then gave a performance that wove together stories from his own life, passages from his historical novel The Good Lord Bird, and musical numbers performed by his jazz quintet The Good Lord Bird Band, blending gospel, spirituals, jazz, and rhythm & blues. It was a rousing evening that both provoked reflection and had the audience on its feet, clapping in rhythm and calling for an encore.

McBride’s appearances this week, which also included a dinner at Giuseppe’s with BCBC sponsors and friends, culminated a yearlong exploration of his work, including a  literary salon, a panel discussion, a historical re-enactment and a film screening, all reflecting either particular works by McBride or themes in his work, such as the abolition movement in the mid-nineteenth century (The Good Lord Bird and Song Yet Sung) and race, religion and identity (The Color of Water.) 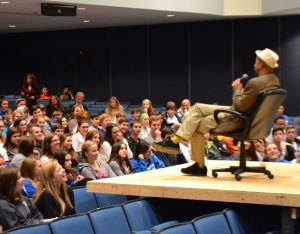 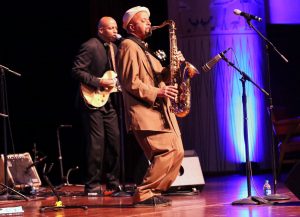